I'm not going to call this a blog post, because I'm not a writer or a blogger. I have never even read a book in its entirety, and you'll soon find out why. I wanted to share how cool Laguna Beach is and always has been, straight from the horse’s mouth. It’s a place where I draw inspiration for my work daily. We live in Laguna Canyon, the old "Dodge City” of drug culture in 1960's and early 70's. The canyon is a mixture of artists, misfits, old hippies, and some wealthy, funky older people. This is the place where Timothy Leary (Katie's sidenote: he was born in Springfield, MA where we moved from, HA!) and the Brotherhood of Eternal Love were born. Timothy Leary was a UC Berkley grad and a leader in promoting a different perception of life through LSD. Here, it's much easier if you read his bio than to filter through my jabber. Even before Timothy Leary and his flower power following, Laguna was already an eclectic spot. It was an artist colony dating back to the Victorian era, but also a place where Hollywood actors would come to hide out and relax in their beach bungalows. Bette Davis, Neil Young, Ozzie and Harriet Nelson, Judy Garland… even Diane Keaton who is a current resident and I was lucky enough to meet.

In 1970 “The Happening” music festival was held December 25-27, known as the West Coast Woodstock and brought in about 25,000 music-loving hippies. "Brotherhood of Eternal Love," an evangelical psychotropic drug dispensing group, flew a small plane over the site, dropping hundreds of postcards affixed with LSD (Orange Sunshine brand) tabs." For a good idea of what the Brotherhood and drug culture of that time were up against, watch the documentary, Orange Sunshine. The title is a nod to super strong LSD tabs of the time. At the very least turn the volume up, and watch the trailer.

Some of my fellow artists from the Sawdust Festival actually knew Timothy Leary and the Brotherhood. I heard some pretty cool stories, most I cannot repeat due to potential legal issues. Bob Foster and Dion Wright knew plenty of what went down here in those crazy awesome days. I remember Bob telling me a story as he lit up a joint before it was legal, in his Sawdust booth, while sipping a jug of whiskey. Katie fell in love with his "Bob Foster" sandals with a lifetime guarantee. He shared stories of LSD actually being manufactured in a house on the side of a steep mountain here in town. Cops were constantly running around the Sawdust neighborhood. Hell, I've even heard of Robert Plant tripping on Sawdust grounds in the 70s from several artists. Bob was a renegade and voluntarily quit [the Brotherhood] in his own fashion, to join Sawdust in its early days. A good read from a couple years back in the LA Times.

Sawdust was founded by outcasts. It used to be called "The Rejects Festival" by the media. These were artists that were not accepted into the renowned Festival Of the Arts, a juried show across the street and known to be a bit political.

The artists said "F" it and started their own show. I’m grateful they did, because I love Sawdust. I love the culture, the people, and the history behind its creation. Read More about Sawdust in a previous blog post >>

One of the reasons I am sharing content of drug culture is because I myself had (in the words of Timothy Leary) “turned on, tuned in, and dropped out” on LSD 25 years 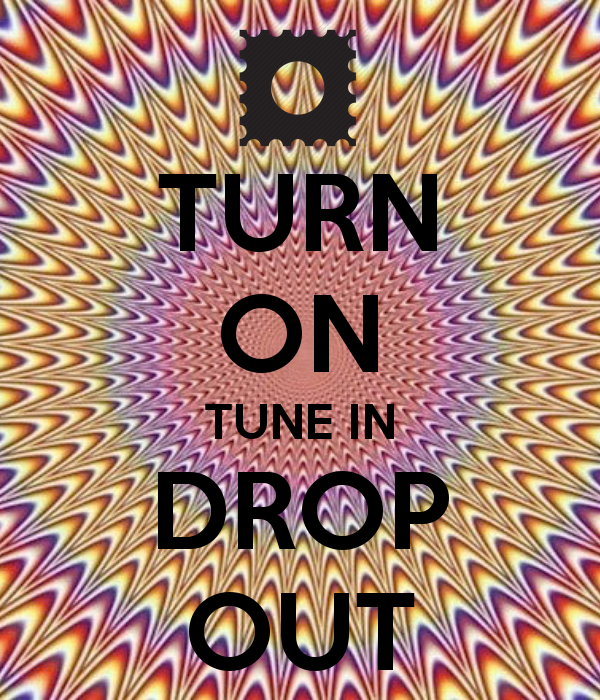 ago and it was truly a mind opening experience. I did it not just to get high, but to sit in a room and let it take my mind wherever it wanted. I first started noting the wallpaper on my bedroom wall starting to move in subtle wavy patterns. My heart started to beat slightly quicker, my thoughts got a heavy caffeine jolt, and I started hallucinating. It was a pretty amazing experience. I could solve any in-depth problem invented by me--I for sure had all the answers. It got pretty heavy when I could actually see math equations appear out of thin air. I solved them all while looking into the mirror and seeing my deep black eyes and face morph into different shapes and colors. Visions of bright pink and purple pulsed to the beat of my heart. Although I only did LSD once, I'm glad I did. It was an experience I will die with--not all happy and wonderful--but a vivid. surreal. lucid. dream.

I think I've come a ways since high school. (Insert: Katie’s reaction, “HIGH SCHOOL!?!?”) Although, I still hate reading books. Anyone who has seen my Instagram knows I’m a pretty visual guy.

All in all, Laguna is a special place to live and create. The art festivals, the beaches, the rough and tumble type we rub shoulders with here in the “kind” canyon inspire me everyday. Maybe one of these days I'll actually read a book, but not anytime soon, I'd rather make a trippy glowing river table. Ya’ digggg?

Back to Adventures in Drake Casting Co.

We offer discounts on bulk orders for table makers and large orders for businesses.